Whilst not strictly a “planning” matter. There has been much local interest over the past 3 years in trying to get new play equipment installed in the children’s play area in Parc Radur.

The RMA were one of the groups who, along with many individuals, contributed to the crowd funding campaign to purchase the new equipment for this play area.

The latest is that the equipment has been procured, we are waiting for a plan to be produced for drainage systems in the area to be re-routed so as not to cause a future risk to the play area and any new equipment to be installed. Once this plan is in place and draining works completed it will then be possible to discuss possible dates for the installation of the crowd-funded equipment.

A brief history of the project.

As this project has been rumbling for quite a while we will not pretend to add all of the detail to this page. What follows are some edited highlights of the story so far. Further details can be seen by following @ParkRadyr on Twitter or visiting the CrowdFunding page where Jamie Grundy has posted a number of updates along the way.

Site meeting held at Parc Radur with various stakeholders. Outcome of that meeting reported as:

“The next step is for Cardiff Council to undertake modelling to develop a suitable drainage system for the area. It was agreed that the risk of damage to the tennis courts added to the urgency of the task.”

“Modelling of drainage system: about a month to 6 weeks Than agree the model with Welsh Water Then seek funding. (Work on Drainage Model completed) could be after summer.”

“But Cardiff definitely sees a need to protect the tennis courts – otherwise they could face significant damage claims with further flooding. The modelling will cost at least £40k – and they will want to ensure that this spend results in action.”

Although all the equipment has been purchased and ready to install, there is a significant problem with the drain underneath the play park and Redrow have agreed install a new drain to remedy this. Currently we are at a stage where Cardiff Council are due to pass the plans for this work to Redrow. Unfortunately this has not yet happened. This drainage work has to take place before the equipment is installed.

Work is confirmed as suspended due to Coronvairus

Flooding issues emerge at the site again – but better to find and fix it now before the equipment was installed and has to be removed again.

An update on the developments on the park people. Work was scheduled to begin late February which is pleasing to see. There is a meeting on 23 February between all partners so we should know more following this. 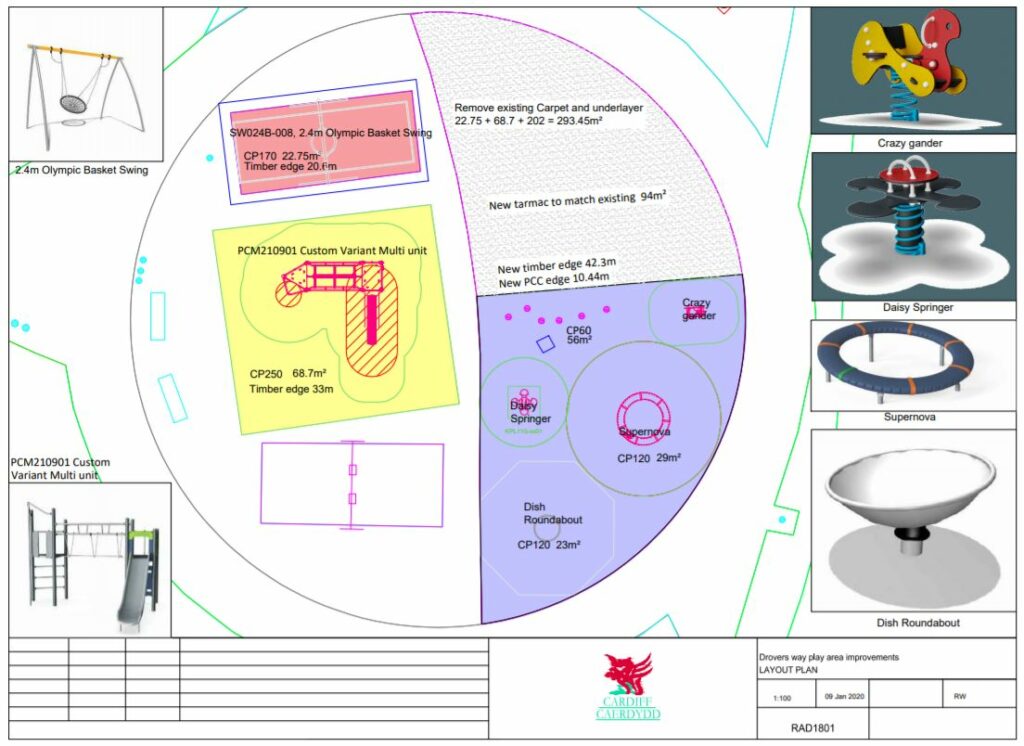 Crowdfunding campaign reached target of £2,500 to pay for the proposed new equipment

First drainage report at the site completed with recommendations on work needed around the play park to stop flooding. Agreed that remedial work should be done before play equipment installed. Works being costed up followed by provisional timetable for it to be completed. Redrow, Cardiff Parks and Plas Dŵr in discussion over funding for this drainage works.

Climbing Frame removed my Cardiff Council due to Health and Safety Concerns.

A lot of attention on the accessibility ascpects of the proposed play park as first plans presented to the community.

Article published on https://radyr.org.uk regarding a Public display of proposed new playground at Drovers Way (at Clos Parc Radyr)

A partnership has been established, between R&M Community Council, Cardiff Council, the Clos Parc Radur Management Committee and Redrow Homes to deliver improvements to the children’s playground at Drovers Way.