Entrance is FREE for RCTS members and a donation of £2 is requested for non members.

Tea and coffee is provided

For any additional information, please contact the Branch Secretary, southwales@rcts.org.uk / 01656 856422

A Charitable Incorporated Organisation registered with the Charities Commission No. 1169995 – VAT Registered No. 197 3433 35 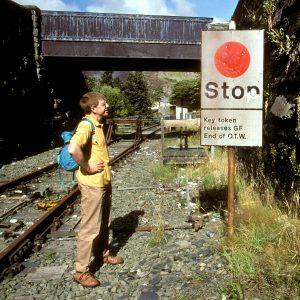 As a teenager in Cardiff during the Beeching era, Geoff Atkins became fascinated by the labyrinth of local railways, and he increasingly aspired to explore those familiar ones that were disappearing, and to learn more about their underlying social and industrial history. 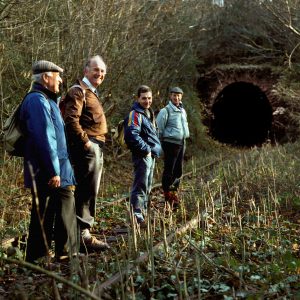 A one-in-a-million encounter with fellow enthusiasts at his first place of work turned Geoff’s dream into reality, prompting years of subsequent research, walking and discovery – firstly around South Wales and then further afield.
Looking back over five decades, Geoff will recount some of his experiences. He’ll highlight his enthusiasm for discovering how railways changed landscapes and lives, and underline how his outings became social highlights for himself and his colleagues – pioneer railway walkers long before it became fashionable to convert abandoned lines into official footpaths.

Photographs and sound recordings from Geoff’s personal collection will be supplemented by material from other sources, comparing rail routes during their heyday with the changes that occurred after closure – whether the tracks were subsequently redeveloped, repurposed or simply reclaimed by nature. Many of the scenes captured have now long disappeared, so the archive media have become valuable documents of bygone days, promising an evening of interest to a wide audience. 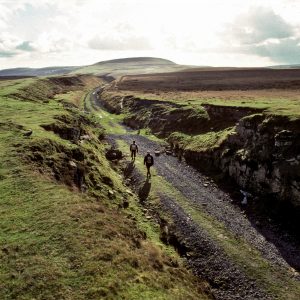 The canal and associated tramways of the Monmouthshire Railway and Canal Company played an important part in the growth, wealth and prosperity of the port of Newport during the burgeoning years of the Industrial Revolution and beyond.
After the decline of the canal and conversion by the company of the tramways into railways in the 1840s, the pace of development was to increase dramatically. 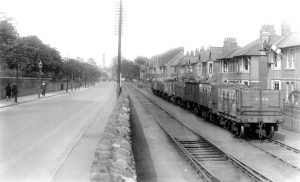 Cardiff Rd Sidings 1930
The railway storage sidings on Cardiff Road outside the Royal Gwent Hospital in the summer of 1930. Officially known as ‘Pitwood Sidings’, the lines originally formed part of the early tramroad route along Cardiff Road to the wharves on the River Usk via George Street and Kingsway. From 1852 this route through the streets of Newport was developed by the Monmouthshire Railway & Canal Company into a passenger service from the Western Valleys that headed through Salutation Junction and George Street, terminating at Dock Street Station. Through running of rail traffic from Courtybella Junction ceased in 1907, and all traffic used the alternative route via the ‘Neutral Mile’ section through Pillgwenlly. Although out of use from 1907 the GWR maintained its right of way along the original route until the 1920’s by the annual passage of a locomotive running light on Good Fridays.
Newport Reference Library

Although we have the legacy of the Monmouthshire Canal to remind us of our i ndustrial heritage, much of the railway network that had projected the town of Newport into a thriving industrial and major centre during the latter part of the 20th century, was to be replaced. 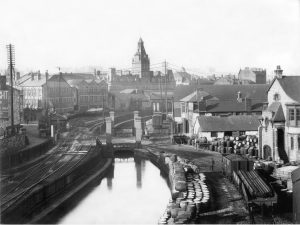 The Monmouthshire Canal at Mill Street 1914
In this view looking north from Mill Street, a barge navigates past the bascule bridge that provided access from the Mill Street railway yard to Cordes Dos Works on the left. It was around the time when regular canal traffic ceased to travel through to Moderator Wharf, Newport to discharge goods. Wagons to and from the works would have been shunted by the industrial locomotive seen in the distance between the arms of the bridge.
Newport Reference Library

With the support of a large collection of archive photographs, Monmouthshire Railway Society ‘Journal’ Editor, Ray Viney will chronicle the history and infrastructure of the company’s lines within the borough of Newport during their short existence and under subsequent GWR and BR ownership. 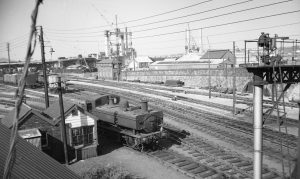 Dock St 1963
In this view from Octopus Bridge, the Dock Street pilot, 0-6-0 PT No. 1656, waits outside the Dock St Goods Yard ground frame, sited at the entrance to the yard. The photograph is undated but, in the background, the erection stage of George Street Bridge confirms that it is sometime during 1963. East Dock St signal box, in the distance, and other boxes in the immediate area closed on 25 January 1960, all lines then being controlled by a new Dock St box sited just out of picture to the right.
M.R.S Collection

Starting on the Eastern Valley line on the northern outskirts of the town at Malpas, he will follow the line into Newport, travelling down to Mill Street and Dock St Depots through onto the Western Valley line via Pillgwenlly, Maesglas and the Park Mile, ending the journey at Bassaleg Junction. He will also be featuring the long closed and often overlooked street railway lines in the centre of the town.

We have a free e-mail mailing list, which contains items of railway interest, relevant to South Wales.

The Old Church Rooms, Park Road, Radyr, CF15 8DF, are an 11 minute walk away from Radyr Railway Station, from where there are frequent  trains.

The nearest bus stop is immediately outside the Old Church Rooms.

If travelling by car, the Old Church Rooms has its own car park.